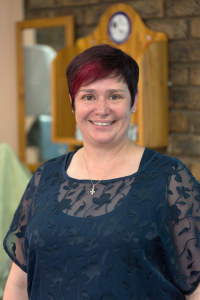 Linda was born in Kempton Park, but grew up and completed high school in Durban. After matriculation she was accepted by the University of the Free State to study physiotherapy and received her bachelor’s degree at this University (1991). She then entered into private practice in Kempton Park in 1992 as a registered physiotherapist.

She then decided to further her academic studies and completed the Master’s degree in Physiotherapy, with Orthopaedic Manual Therapy as focus area, at Pretoria University in 2002. She continued with her post graduate studies at the North West University (Potch. Campus) and received her Ph.D. degree in May 2005.

Linda’s major focus area is the treatment of patients suffering from chronic pain and challenging sport injuries. She toured extensively with the national netball teams as one of their physiotherapists. She is also involved in the implementation of the neck exercise programme she developed for schoolboy rugby players as part of her PhD research.

She is involved in post-graduate training for physiotherapist and presented at various SASMA, SASP and PainSA congresses. A highlight was presenting at the World Confederation of Physical Therapists congress 2015 in Singapore. She was one of the invited speakers at the “Future Forum” discussion on the global future of physiotherapy as well as a debate on “Exercise is Medicine”. She has been elected as Executive committee member of Exercise is Medicine South Africa from 2016.

As Quality Improvement Portfolio Chair (2006 – 2011) for the South African Society of Physiotherapy she strived to improve the standards of physiotherapy in South Africa. The ultimate goal was to facilitate physiotherapy service delivery to all relevant patients in SA. This will be to the benefit of each patient receiving physiotherapy so that they can enjoy improved quality of life. Subsequently she was elected at president of the SASP (2011 – 2015) and during her term as president endeavoured to further the profession in South Africa and grow the SASP through implementation of the apex priorities of the SASP.